By Nicky Rudd
Filed in PR

So you may have noticed it’s London 2012 and the UK has been overtaken with national pride and Olympics fever. At the Padua Communications office, we have been avidly keeping tally of how Team GB athletes have been doing. Apart from it being an extremely emotional event (we’re in tears on average every 12 minutes!), we have been extremely impressed with how well the Olympians have come across in media interviews.

Speaking to the media can be extremely challenging – particularly if you have a difficult subject matter but here are some top tips (as demonstrated by our athletes and others).

1. Be clear, polite and concise

Journalists have schedules to fill, particularly in broadcast. Most of the interviews that you will see immediately after a race will be a couple of minutes max. When you’re not sure of how much time you have when dealing with media, be helpful, informative and brief! (Team USA’s Sanya Richards-Ross gets a thumbs up from us)

Following on nicely, when dealing with the media, when you feel you have answered a question, don’t be tempted to continue talking. In some cases, this is exactly what a journalist is hoping you’ll do and as you’re beginning to go off message, you could be giving them fuel for another story. (Think like Jess Ennis – she has 7 disciplines she can talk about but her interviews usually manage to cover several of these in a bite-sized format) 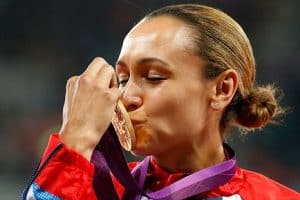 As demonstrated by all of the Team GB athletes, be passionate about your subject. Before last week, I knew very little about the Long Jump but I’ve become an afficianado after hearing Greg Rutherford speak in his interviews. Who knew the Long Jump could be so interesting?

Again all of team GB’s athletes have won gold here. Instead of a pre-learnt patter, genuine emotion and integrity wins out in an interview. Particularly with broadcast, this has an impact on your tone of voice and your body language. There can be positives and negatives with this though – so be aware. (Think Mo Farah or Mark Hunter and Zac Purchase.) It’s also worth thinking about the human element of your story. People like hearing about people, so two brothers in the same race both winning medals – that is Olympic gold!

5. Try and be up front about difficult subjects and don’t let awkward questions phase you

You’re much better off being up front even with difficult subjects rather than trying to hide something from a journalist when they think they’re on to a story. Our gold medal for handing awkward questions throughout the games goes to Lord Coe. Even with a nation’s frustration of not being able to get tickets, when asked, he manages to put a positive spin on it. That’s preparation and demonstrates why media training is a crucial element of your PR strategy before dealing with the media.