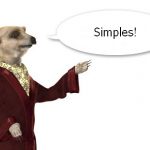 This week, our guest blogger, Michael Walker shares his thoughts on clear messaging.

So many promotional efforts seem to revolve around the idea of making things simple or easy. There’s a whole series of ‘for dummies’ books covering everything from SQL to GCSE revision. But if these things could really be done by dummies, there wouldn’t need to be books about them.

Some things are just complicated. And when technology is involved, many of them are. What we really need is clarity – and not just in the language used to explain ideas or describe products, but in the order in which the points are presented.

Some ideas follow a linear logic. Provided you get it all in the right order and are careful with the choice of words, anyone paying attention should be able to follow. Sometimes you need to introduce several thoughts at once in order to make it possible for everything to fall into place; you have to say ‘trust me on this, it will all make sense later’ and put them in as sensible an order as you can find, perhaps starting with the most familiar

And sometimes there are ideas that can’t be broken down. I remember an afternoon at primary school when I was introduced to fractions. I could see there was an idea here but I couldn’t grasp it, no matter how the teacher tried to explain it to me.

I did get fractions eventually, and years later was able to sympathise with my own children when they grappled with new ideas. It made me realise that some ideas have to be grasped whole and can’t be simplified any further; the best you can do is set up all the right pieces in advance and let them click into place naturally.

So let’s not worry too much about making things ‘simple’ when they’re not. Let’s be clear instead, and simple will take care of itself.

Further information on Michael can be found here: www.michaelwalker.co.uk